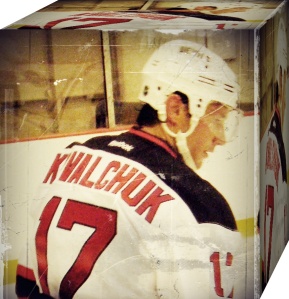 Since we opened up a conversation about Ilya Kovalchuk on Twitter today, I thought I would elaborate a little more on the situation surrounding Kovalchuk’s possible return to the NHL.  First, I want all fans to get this through your heads: KOVALCHUK IS NOT RETURNING TO THE NHL NEXT SEASON (2014-15).

That being said, this does not mean that he is NEVER returning to the NHL.

Second, I’ve been sitting on this information for a few months now.  It goes along with what I told a few people in the Devils press box.  I told them New Jersey was getting their pick back before it was announced.  [Dan Rice from The Hockey Writers can confirm this.]

So here is what I know about the Kovalchuk situation…

The first thing you need to see is the actual dilemma: a player with many years left on his contract decides to retire, thus voiding his contract.  He then goes to play in another league for a year or two and then decides to come back to that same team he voided his contract with in order to renegotiate a brand new contract.

Now, for those aware of the actual Kovalchuk contract, it started off as a very controversial contract. His contract was for $100M for 15 years (that was the second contract that the NHL actually approved, the first one for $102M for 17 years was denied by the NHL).  After 3 seasons into that 15 year contract, he decided to retire to go play in the KHL.

During the lockout, Kovalchuk and his band of brothers got the ball rolling to see how he could get out of his contract.

The funny thing about this is that if Kovalchuk had waited a few more weeks and had a little bit of patience, he probably would not have retired at all, because that was when the NHL announced that they would allow players to go to Sochi.  [Not so easy to call up and say ‘can we void what I just did?’]

There are other elements involved with his decision to jump ship, including Vladimir Putin having his say in the matter.  But either way…his jumping ship had a lot to do with the Olympic games in Sochi.  It was something he said could happen if the NHL had not agreed to allow players to play in the Olympics.  He told me this back in 2010.  [As a side note, I was given Kovalchuk’s word that he would never lie to me.  If he said he was going to do it, he was going to do it.  As of today’s date, he has been true to every single thing he has ever told me.]

Back in New Jersey, there were other elements involved.  One of the reasons why Kovalchuk signed with New Jersey was because he wanted to play with Zach Parise.  The ramifications of signing a contract like he did meant that New Jersey would not be able to offer Parise something similar.  Parise, instead, headed home to Minnesota.

Kovalchuk’s contract no longer looked as great as it did when he first signed it.  The team lost an important element that was able to take the team all the way to the Stanley Cup Finals in 2012.  His contract would prevent another similar run…and all he wanted to do was win a Cup of his own.

In a way, going to the KHL was a win/win for both sides.  It voided that absurd contract that had caused New Jersey so many problems (including costing NJD money in fines and draft picks), and it allowed for Kovalchuk to prepare for the Olympics.

Now that the Olympics are over, Kovalchuk should be prepping to come back to the NHL, right?

Well…apparently I’m the main person talking about this and have been since the day he announced his retirement.  A friend of mine started asking around because I stuck by what I was saying and no one else in the media was saying what I was saying.  Then he heard a chirp…and then it turned into a full fledged…Michelle was right all along.

There has been an ongoing conversation in the league of Kovalchuk’s return to the NHL, but it’s not as soon as fans hope it will be.  And this is why…

Retiring, voiding the contract that still had many years left on it, playing in a different league and then trying to come back to the same team to renegotiate a brand new contract just a year or two later?  Why, that has never been done before.  How will the league approach this situation?

The issue isn’t just Kovalchuk.  There are other players that had huge contracts that turned into a detriment to themselves and their team.  If Kovalchuk could get away with getting rid of a bad contract and then renegotiating a new one with that same team, that would mean other players that were in Kovalchuk’s similar situation would follow suit.  In other words…Kovalchuk’s legal team may have found a loophole into getting rid of and renegotiating a bad contract.

The word is that other teams don’t like this at all.  While there are the ‘penalties’ of ‘if’ Kovalchuk were to return and needing approval from all teams (or sit out a year from professional competition), there is ongoing talk that the other teams do not want Kovalchuk to go back to New Jersey.  They want the opportunity to ink him.

But what if Kovalchuk only wants to return to New Jersey and he says it’s either New Jersey or bust?

If Kovalchuk only wants to return to New Jersey and the rest of the league is not okay with that, at what risk will this cost the NHL as a whole?  Are the teams going to be that big of a jerk saying if they can’t get the opportunity to ink Kovalchuk then Kovy can kiss his chances at the NHL goodbye?

Is the NHL okay with permanently losing Kovalchuk to the KHL?  Is that a risk they are willing to accept?

The NHL wants the best players in the world playing in their league.  If the stickler in all of this is that the other teams are not going to approve Kovalchuk’s return because he only wants to play for the Devils, then Kovy will either have to sign with another team or stay in Russia.  Then again, if Kovy doesn’t want to play for the Devils then really…there is no issue at all.  He’ll be able to return to the NHL with no problems.

But this is Kovalchuk we’re talking about.  Of course, there’s NHL drama involved.  Let me help you read into that statement…there would be NO DRAMA if he didn’t want to return to the Devils.  There would be drama if he did.

From what fans and media have told me, Kovalchuk is still building his home in Alpine, NJ.  They never stopped construction.  The property never went up for sale when he jumped ship to Russia during the Olympic season.  Construction continued.

As far as the time table on his return, don’t count on next season due to the unresolved issues currently on the table for discussion.  I wouldn’t be surprised if it took the league another year to figure out how to approach this situation.  I also would not be surprised if Kovalchuk ended up staying in Russia for the entire term of his contract with SKA St. Petersburg, just because it may take that long for the league to come to a consensus.

If you’re wondering if he jumped ship for this Olympics what makes us think he won’t try to do it again…Russia won’t be hosting the Olympics anytime soon, so there’s your answer.  His need to be in the last Olympics was very important because it was in his home country and he had to represent his country and win the gold for Putin…I mean, his country.  [Oddly enough, he wasn’t in the World games due to having knee surgery, yet Russia won the gold.]

So while fans keep their hopes up for a Kovalchuk return, just understand that there are some very complicated legal issues involved with allowing him to return.  It’s not as simple as all 30 teams giving the okay.  Those other 29 teams have some reservations regarding what Kovalchuk would like to do.  There’s also addressing that loophole Kovalchuk’s legal team found.

[s/t to my pal D.E. for following up on my original story last summer]

This entry was posted on June 18, 2014 by Michelle in Ilya Kovalchuk, New Jersey Devils, NHL.