You know hockey is starting up in NYC when you start to see players making their appearances around New York City.  Today, Wayne Simmonds and Claude Giroux from the Philadelphia Flyers stopped by the NHL store for a quick interview with the NHL Network.

This short interview was filled with a lot of humorous moments.  Main topic to poke fun at?  Their teammate Jakub Voracek.

Voracek was listed as worst dressed by both of his teammates.  “He just doesn’t get it,” Giroux said.  Simmonds added that it’s like he combed his hair with a pork chop.

There are days he doesn’t cut his hair or shave.  In other words, he’s just one huge mess. 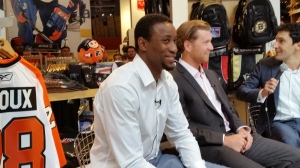 Simmonds added that Voracek had a white suit he wears all of the time.  He doesn’t even bother to iron it.  He just shows up to work in it.  He just doesn’t care how he looks.

What other hobbies and sports do they play outside of hockey?  Simmonds said Giroux was good at all of the dumb stuff like darts and bowling.  Simmonds…he can’t be bothered.  He’d rather play real sports like soccer.

Going into this season, Giroux said that the team will find success if Simmonds scored 50 goals.  Simmonds responded that success would require sticking together.

Another point of interest is that Wayne Simmonds grew up as a Detroit Red Wings fan.  A little odd considering he’s from Toronto.  He said, “I hate the Leafs.”  This has more to do with growing up in Toronto and everyone around him loving the Leafs.  He decided he’d rather be a Red Wings fan instead.

Giroux met only one hockey player as a kid: Eric Desjardins.  He met him when he was 10, and was able to get him to sign a hockey stick for him.  He didn’t meet another NHL player until he was drafted at age 18.

The Flyers preseason begins in a couple of weeks.  You’ll find their schedule below.