Reading Material for the Hockey Fan

For those needing new hockey material to absorb, I have a few suggestions for you.  I’ll be talking about these books in the upcoming months, as well as doing interviews with the authors, and interviews with a few players that these books pertain to.  If you want to get in on the hockey conversations I’ll be having this season, make sure to get your copy of each of these books.

Screen shot from The Hockey Saint.

There are only a couple of authors that have done hockey graphic novels, and Shapiro is one of them.

What I liked about The Hockey Saint are the underlying themes and morals it is trying to teach hockey fans about hockey players.  I will say that the hockey player in this graphic novel does remind me a lot of Jaromir Jagr, all the way down to a few of his not so gentleman-like characteristics, including the stuff that makes journalists not like him (and vice versa).

The main moral of the story is “don’t worship hockey players.”  They are not heroes.  You could worship and idolize them most of your life until one day you get a chance to meet them and they disappoint you beyond belief.  They weren’t that superhero you dreamed them to be.  They’re rude, mean and just plain horrible, especially to their fans…the ones that believe in them.

Mind you, not all hockey players are like this.  I’ve met many hockey players over these last seven years and only one has ever disappointed me beyond belief.

If you want to idolize people, idolize the ones that made a great difference in this world…the ones that made humanity greater than it was before.  Respect the hockey player for what they’ve done, but don’t worship them.  There are a few that don’t have the character off the ice to go along with the great things they’ve done on the ice.

You can read an excerpt of The Hockey Saint at Deadspin.

Just FYI, even if you don’t have a Kindle, you can still download the Amazon Kindle app to your device.  The download version of The Hockey Saint is $2.99, $10.82 for the paperback.  {Last night while I was downloading the book, there were only 2 paperback copies left.  They have restocked and now have 11 paperback copies available.}

I highly recommend reading this book.

You can download the Kindle app for free by clicking on the link below.

2. Boy on Ice: The Life and Death of Derek Boogaard

The much awaited investigative novel from New York Times Pulitzer Prize Winning Author John Branch hit the stands earlier this month.  It is a must read for every hockey fan, no matter if you are a Minnesota Wild or a New York Rangers fan.  This is something of great importance because it talks about what led to the demise of Derek Boogaard.

This book goes into detail of how Derek became a hockey player from his earliest beginnings, to how this enforcer ended up in the NHL, and how being an enforcer ultimately led to his death.  From the way he was able to get a hold of so many prescription pills, to his addiction to pain medication, to how he was later diagnosed with Chronic Traumatic Encephalopath (CTE) post-mortem, it makes you wonder if this could have been done differently.

Pick up a copy of this book.  It will have you asking the same questions Branch has been asking.  Is fighting in the NHL really worth it? 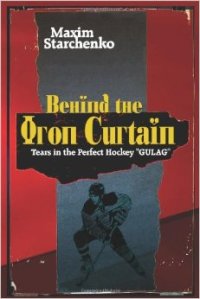 3. Behind the Iron Curtain: Tears in the Perfect Hockey ”GULAG”

This book is by former hockey player Maxim Starchenko.  This Ukrainian hockey player never made it into the NHL, but he did train with Ivan Pravilov.  Pravilov was accused of sexually assaulting two 14-year old hockey players in his home in Philadelphia in 2012.  While he was in jail, he committed suicide.

Starchenko’s story is about being a hockey player training under Pravilov in his Druzhba78 youth hockey program.  He, as well as many other boys, were abused according to Starchenko.  This book came out in December 2011.  Pravilov was accused of abusing the two boys in January 2012.  He committed suicide February 2012.

There are two NHL players that were trained under Starchenko.  One of them is Dainius Zubrus (New Jersey Devils).  The other player was former NHLer Andrei Zyuzin (who was also a former New Jersey Devil).  Zyuzin now plays hockey in the Ukraine.

2 comments on “Reading Material for the Hockey Fan”