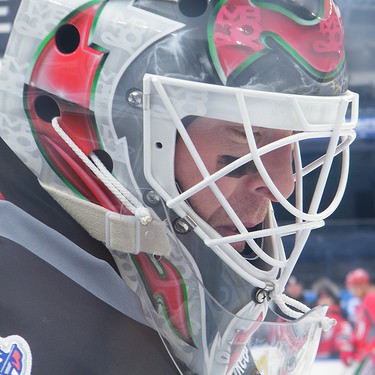 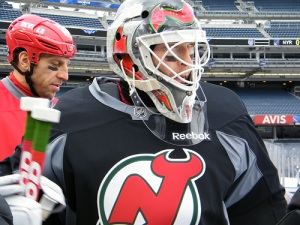 For those familiar with my career and work, you may remember that I started off with a blog on the side called “Michelle Kenneth’s Hockey and Musings.”  When I decided to retire at the end of the 2011-12 season, I changed the blog to focus on more spiritual things.

Now that I’ve been back in the press box for the past year and re-learning how to love hockey again, I decided to resurrect the old blog.  Why?  Because not only do I think the fans and players missed it, but I think the old blog was my true heart and soul of covering hockey.  It was in the blog that I could talk about whatever I wanted to talk about.

Usually, that scared the hell out of hockey players because they had no idea what I would pick up in the locker room.  That’s what Ilya Kovalchuk said the players said about me.  Why were they scared?  Because I picked up that piece of information from their brain.  It was never spoken.  I’d print what I picked up.  I was right 100% of the time.  That was what scared them.

Probably the most epic picking around in someone’s brain was finding out Jaromir Jagr was going to return to the NHL and he wanted to play for…DUN DUN DUN…the Devils!  I remember the look on Patrik Elias’ face when he realized I might have picked something up.  Only thing was…it took Jaromir several years to come to the Devils.  At the start of this season, Jaromir mentioned to the press that it took him a while to get to the Devils.

Besides scaring the crap out of the players (LOL), the blog was also a lot of fun.  It allowed players to play jokes on one another.  Martin Brodeur played the epic joke on David Clarkson in my blog.  The NHL’s Best/Worst Dressed list was the platform he did it in.  Marty picked Clarky as the worst dressed.  In a way, he did it because he was outing the fact that Clarky was a loyal follower of the blog.  You know…because players never read what people are writing. {That’s what they say.}

So I wrote up what Marty said.  Clarkson was browsing the blog one July day and discovered what Marty had done.  This was the beginning of an ongoing inside joke between the three of us.  Who knew Marty had it in him?

This is one of the reasons why the blog became popular.  It gave people a different look at hockey…and for Devils fans…they got to read the cryptic stuff I was saying, but only the players could decipher what was really going on.  Yes, I know it drove the fans crazy, but I did it that way for a reason.

The blog also gave fans/players a way to see what else was happening in hockey that they weren’t invited to…including that time I went to Disneyland and showed up in the locker room later on that night.  I got the, “You went to Disneyland without me?”  Yep, I sure did.

So with the resurrection of this blog, I welcome all of you.

Coming up between now and the end of June…lots of NHL Awards talk.  I’ll be preparing for the Awards, which unfortunately for the guys means lots of talk about what I’m going to wear.  Good for the gals…bad for the guys, so boys, you can skip over the chick stuff.

I may have a few guest posts in the future from former NHL players that would prefer I publish their stuff on my blog.

I am also starting up the Best/Worst Dressed in the NHL list, because it is that time of year.  There will be something old (the list) and something new (you’ll read about it in an upcoming post).

This time around, the site will be a little friendlier to fan contributions.  So if you have a special photo you want to share or experience you had…you’ll be able to share it.  Details forthcoming.

And OMG…TRIVIA WILL RETURN.  In order to get in on the trivia to win special prizes, you have to be following me on Twitter (@MichelleKenneth).  My tweets are protected, so you’ll need to request.

So there will be a little of the old stuff everyone loved, and like everything I do, a new season means I re-brand, so Michelle Kenneth’s Hockey & Musings (Take 2) will have some new stuff, too.

Like everything…the main rule around here is that everyone play nice…unless I go on a rant (which can and will happen)…because God knows when I rant it even hits the NHL office and gets passed around the PA.

So ladies and gentlemen…I give you Michelle Kenneth’s Hockey & Musings (Part 2).

Next up…we’ll start discussing who the best/worst dressed in the NHL are.  Oh, and for the other media who try to do this…don’t.  A lot of players know who the original list belongs to and they don’t like answering you…especially if they see me standing right there {this happened at the NHL All-Stars in Ottawa}.

This entry was posted on May 1, 2014 by Michelle in Uncategorized.